In 1967, I had an idea for a film: to draw the world's biggest sunflower. The film was to be a slow-motion aerial ballet in which an old bi-wing aeroplane skywrites “draws” the stem and leaves of a flower in the sky beneath the sun, the sun itself thereby becoming the blossom of a "Sun" flower.

The actual event took place early one morning just after sunrise in the California desert northeast of L.A. The skywriting plan was designed by Mr. V. E. Noble of Torrance, California, who claimed to be the original inventor of skywriting back in the 1920’s. Mr. Noble, 67 years old at the time, thought this idea sufficiently crazy enough to come out of retirement. He didn’t actually fly the plane himself, but controlled the event by radio from the ground. The pilot was a guy named “Skip” who had flown fighter planes in World War II. He was right out of the movies… leather pilot’s helmet and goggles, bomber jacket, white silk scarf and he was the silent type, very little to say.

I hired a camera man to film the event. However, he failed to take into account the technical difficulties involved in photographing directly into the sun, so the film didn’t turn out. It cost $5,000, which was my entire life savings at the time.

The Skyflower itself, however, was spectacular. . . 2 miles wide & 3 miles high. It lasted about 40 seconds. Fortunately, my still photographer managed to grab a couple of black & white photos before the wind blew it all away. 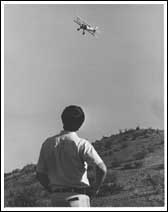 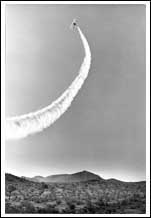 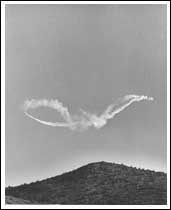 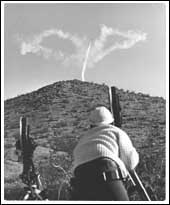 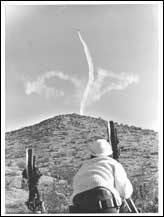 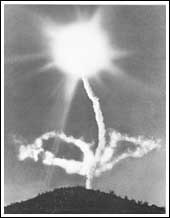 The song, Sunflower is a melody I wrote in the process of exploring a chance compositional concept wherein words are used to create the intervals for melodies. Sunflower is based on the word cantilever. I should have called it Cantilever, especially in light of the way the last chord hangs out in space. I ended up calling it Sunflower because I wanted to use it as the music for the film.