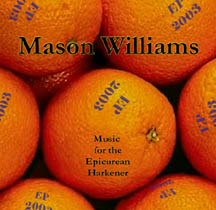 A collection of Mason Williams original compositions, beautifully crafted, masterfully produced and released by his own independent label, Skookum Records.

Still plenty of fuel left in the tank for the "Classical Gas" man, Mason Williams

Williams, Oregon's own Musician Laureate, who is currently working on a number of projects involving music, creative writing, poetry and of course, comedy, had this to say about the nomination: "The music business is always full of surprises. To make an album with my lifelong musical friends at this stage in the game and have it nominated for a Grammy is definitely a great surprise. See you at the Grammys!"

Grammy Awards will be presented on February 13th at the 47th Annual Grammy Award Show on CBS.

Visit www.grammy.com for full listing of categories and nominees.