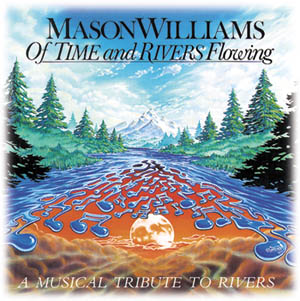 "Of Time and Rivers Flowing" was a concert I put together during the summer of 1982. The concept was to present, in chronological order, songs about rivers and water that have been popular throughout history. The intention was to show our long-standing relationship with rivers --that they run not only through the land, but through our hearts and minds as well.

The idea of an entire program based upon rivers and water came about in this manner. In May of 1982, the Springfield Utility Board announced plans to put five hydroelectric dams on the North Fork of the Middle Fork of the Willamette River, one of the most beautiful, wild, free-flowing streams left in the country, and also my favorite trout stream.

I went with several other citizens from Oakridge to a public forum held in the high school auditorium to discuss the matter. Everyone was adamantly against the idea of the dams. Feelings ran high.

However, one group at the meeting, the McKenzie Flyfishers, a small club of flyfishing enthusiasts from Eugene, Oregon, was organized with facts and figures about the negative effects this project would have on the river should it come to pass. 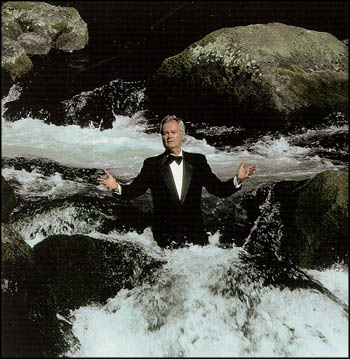 After the meeting, in spite of the fact that all felt they had done their best to speak on the river's behalf, for me the idea persisted that if only somehow the river itself could have been at the meeting to speak for and defend itself at its own "trial," so to speak, it would have made the most eloquent statement of all.

Music and water have much in common; rivers are like music and music is like a river. They speak well of one another. Both flow through time, purifying themselves as they go, nourishing life along the way.

Then it dawned on me that the river could have a voice, in the form of the songs and music it has inspired over the years. Music could bring the river to the meeting! I began searching for songs about rivers and water and managed to collect more than 400.

In March of 1983, the McKenzie Flyfishers and I joined forces to present three benefit performances at the Hult Center for the Performing Arts. We sold out all three shows and the Flyfishers used the money earned to successfully lobby a bill through the Oregon State Legislature. On July 6, 1983, the governor signed a bill formally adding the North Fork and its headwaters, Waldo Lake (the purest lake in the world!), to Oregon's system of protected State Scenic Waterways.

Only two percent of the rivers in America are still wild, free-flowing streams. Federal laws set up to encourage energy development have not adequately addressed the numerous other benefits rivers can and do provide. In the ever-increasingly industrialized world in which we live, the natural river becomes a rare gem impossible to value, possessing an intrinsic reality unrelated to economic profit.

Today the "Of Time & Rivers Flowing" concert has continued to evolve in content. A reflection of "the river" metaphorically through time, it is a chronological river of musical history spanning almost 400 years.

The songs tell the story of our long relationship with rivers. Rivers have been the routes of exploration, the boundaries of territories, the highways of commerce, and they have sustained us with water, food, recreation, beauty and inspiration. We sing of it, and in doing so, reflect ourselves. Some of the more recent songs, unfortunately, speak of the degradation the rivers have experienced in modern times.

The concert serves to draw attention to the universal experience that is the river. Of Time & Rivers Flowing makes the audience aware of the potential of our collective personality. By giving the river a voice - a chance to speak to us through the music it has inspired - it can remind us of what we mean to each other.

In my opening remarks for the concert, I point out several ways in which music and water are alike, as follows:

Good Evening Ladies and Gentlemen and welcome to our concert. We’re going to be taking you on a musical float trip down the river of time.

We’ll put in at the year 1717 with some “Water Music” composed by George Frederich Handel. Then we’ll be traveling chronologically from these headwaters of yesteryear down through the canyons of history, stopping off at various points of interest along the way Then take out at two songs by the Talking Heads in the mid 1980’s.

All of the songs we’ll play for you have something to do with water, and since we’re 70% water ourselves, they’re really songs about us.

My friend John Hartford once told me that he thought water probably invented man just so it could have a way to walk from one place to another.

Music and water are a lot alike in so many ways . . . both flow though time, purifying themselves as they go, both nourish life along the way . . .

And music, like water, has the amazing ability to renew itself . . . these songs from our past, like water from another time, come together to form, in essence, like a river within a river, like times within a time . . . the past within the present.

If you think of music as being like a river of time that flows through the “country of your mind” . . . together here tonight we constitute a “country” and the song of the river flows though us. 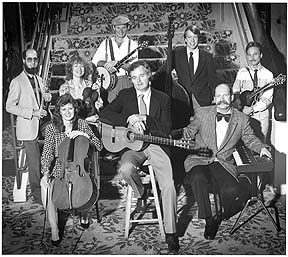