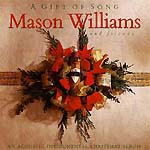 "A Gift of Song" is a Holiday Concert featuring Mason Williams & Friends as guest artists. They perform some selections with the orchestra and some by themselves. Local adult and /or children's choirs, special guests and selections by the orchestra are also a part of the program.

The show is a revue with Mason serving as the host for the evening. The material performed by Mason's band comes partly from his 1992 Holiday CD release "A Gift of Song." Mason rounds out the program with sing-a-longs, some carol parodies, and songs performed with the choirs and orchestra.

The Orchestra and choir selections are drawn from the traditional repertoire and other sources. The Eugene Symphony Holiday programs are a good example of the concept.

Mason Williams & Friends, combined with orchestra and local community artists creates a fresh, and at the same time, warm and familiar concert. It makes for an excellent Holiday celebration.

The choirs and musicians created a Christmas delight. If Mason Williams were a Christmas tree, he would be decked out with multicolored lights, gorgeous angels, humorous ornaments shimmering tinsel, dazzling garlands, glistening icicles and twinkling stars. He would be bright, bold, sentimental, nostalgic, funny, tender, thoughtful, clever, luminous, resplendent and gleaming. He would enchant, amuse, delight, captivate, endear, transport, inform and please.

Just like he did in the spectacular program he gave with the Eugene Symphony Orchestra at the Hult Center on Friday night. Whether singing silly satires, playing guitar or acting as master of ceremonies, Williams was in full glow in the "Gift of Song" holiday program fully loaded with nearly every Christmasy musical element imaginable - traditional carols, goofy parodies, haunting pop tunes, sacred works, originals, the familiar and the unexpected, all of it done to perfection.

Christmas doesn't get any merrier than this.

Most significantly, for his 12th appearance with the Eugene Symphony Orchestra, Williams veered away from merely being a celebrant of his own work to being a gracious impresario of local talent by turning the spotlight onto five outstanding local choirs. In addition, he gave the stage over to the Eugene Symphony Orchestra, University of Oregon President Dave Frohmnayer (for a clever car horn solo stint) and his own band members. So much was going on - and so much of it was marvelous - that only the grumpiest of grumps failed to be touched by it.

Built around familiar selections from Williams' best-selling "A Gift of Song" CD, the generous concert had delightful originals ("Guitar Carol," "Mistletoe Mustache," "Hawaiian Sleigh Ride"), welcome standards ("White Christmas," "I'll Be Home for Christmas," "Sing We Now of Christmas," "Do You Hear What I Hear?"), funny takeoffs ("Christmas Goodies," "The First Motel," "What Tune Is This?") and a sing-a-long ("Deck the Halls," "Silver Bells").

Interspersed throughout were five choirs that revealed the variety of experiences and depth of talent in the Eugene--Springfield area. Each choir nailed its selections: the Young Men's Ensemble of the Oregon Children's Choir (directed by Laurie Guttormsen), a jazzy "Santa Claus is Coming to Town"; the Eugene Chamber Singers (Jim Miller), a sprightly "Twelve Days of Christmas"; the Sony Disc Manufacturing Holiday Choir (Diane Retallack), a smooth "Festival of Lights"; the Oregon Young Women's Choir (Paul Westlund), a stirring "Noel Noel"; and the Oregon Children's Choir (Peter Robb), a moving "Let There Be Peace on Earth." As pleasing as the choirs were individually, they were full-fledged knockouts when massed together for rousers such as "Joy to the World," "Christmas Goodies" and "We Wish You A Merry Christmas" that filled the cavernous hall with lovely voicings.

Underneath it all, the Eugene Symphony Orchestra, ably conducted by Wayne Bennett, provided supple accompaniment. This orchestra shines in a supportive role, and this show allowed it to beam.

When given a chance to solo, the orchestra drilled a shimmering "Christmas Medley" and a stirring Farandole from Bizet's "L'Arlesienne Suite."

The evening's unsung hero was, Williams' longtime collaborator, pianist Art Maddox, who had a hand (or two) in nearly every selection played, and each time delivered finely detailed accompaniment. His gorgeous instrumental original "Winter Lullaby" highlighted a concert loaded with highlights.

Fred Crafts is The Register-Guard's Critic-At-Large

Other shows by Mason Williams & Friends: